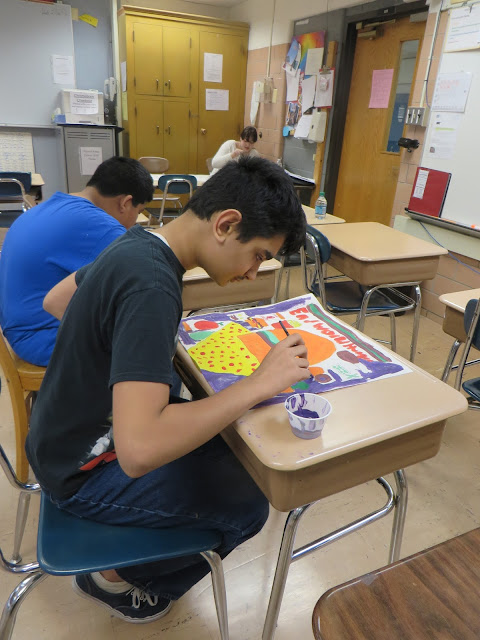 April 2016 - We received 11 Demandments complete with amazing essays and helpful links from East Prairie School, 6-8th grades in Skokie, Illinois! We can't wait to share all the incredible work and knowledge. 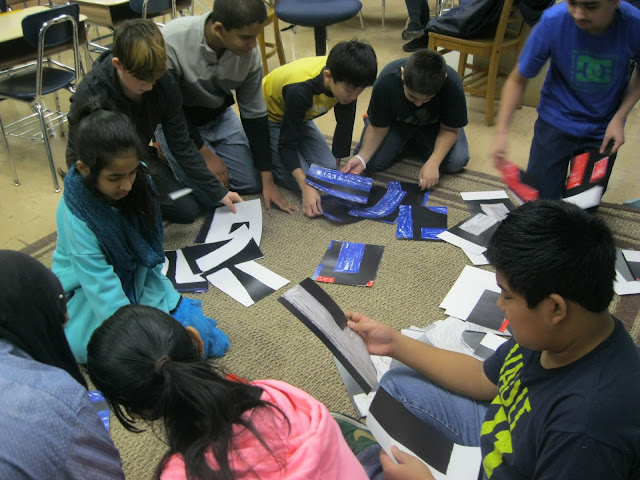 February and March 2016 - Students from East Prairie School, 6-8th grades, Skokie, IL plan their Demandments, which will include both artwork and statements. 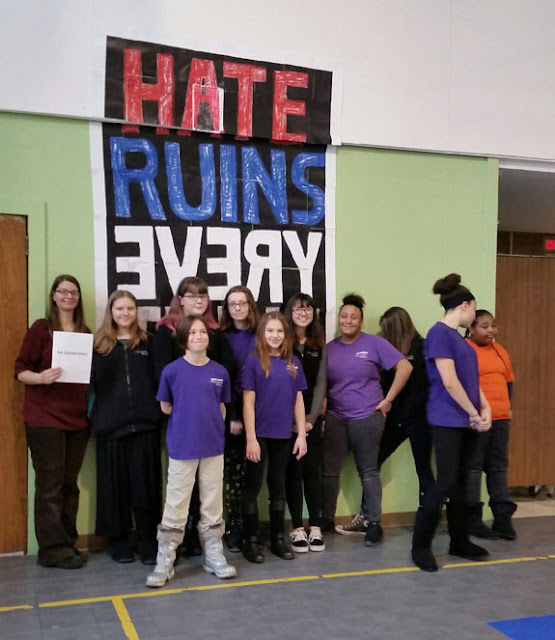 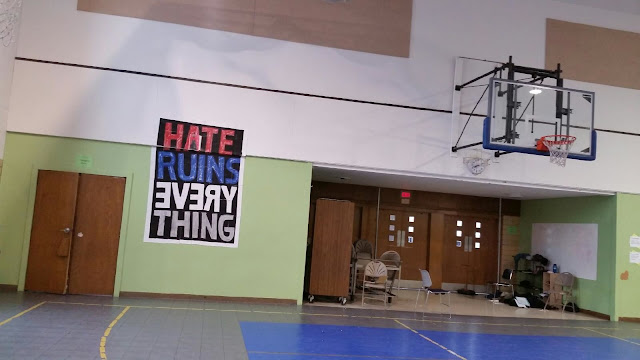 Fall 2015 - We took insights given in surveys and applied them to our website.
A comprehensive reading list is now underway. A recommended film list is underway. 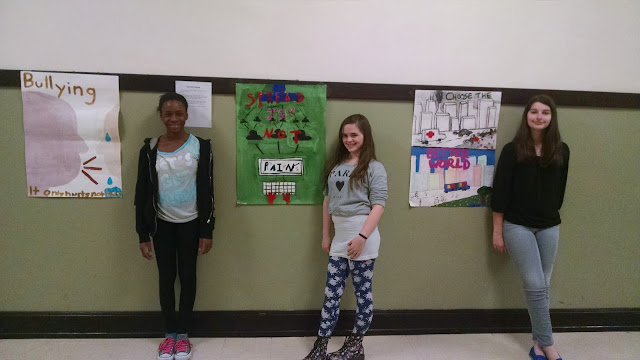 Summer 2015 - Girl Scouts continue to use The Demandments assignment as part of earning
a Silver Badge which highlights social and community aspects. 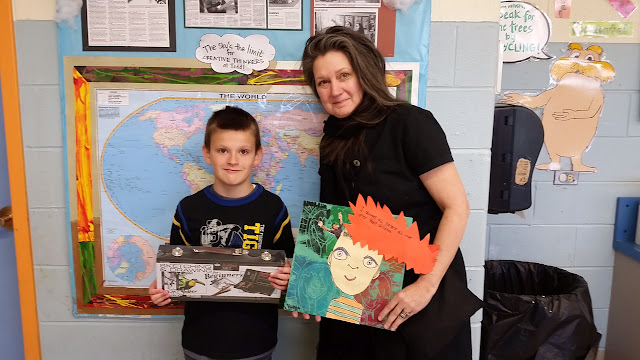 May 2015 - Vanya, grade 2 from Todd Hall Elementary in Lincolnwood, IL has his artwork selected for
a future mailer to promote the program. He was rewarded an art kit.


March 2015 - Several more classrooms have participated. Mural kits, those offered in a kit and mailed free,
work better than having educators print them in-house, work best. 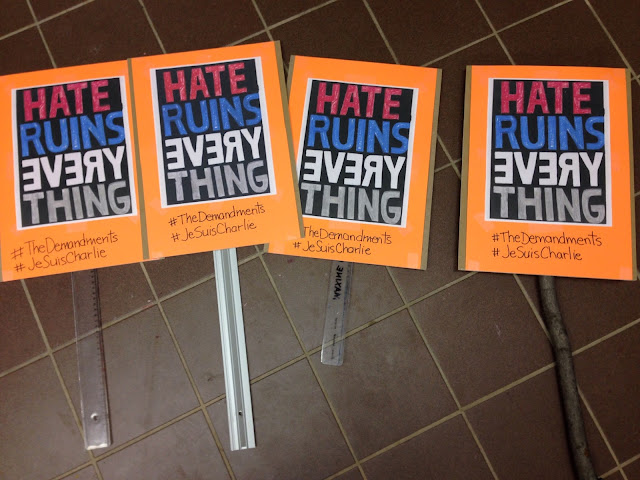 December 2014 - The Demandments Program participated in Ingenuity’s Partner Starter Institute, a “how to” for arts education organizations and teaching artists new to working with Chicago Public Schools. The Partner Starter Institute featured veteran community arts partners and CPS leaders who provided the fundamentals of working with CPS, guidance and tool kits on designing and assessing successful school partnerships. 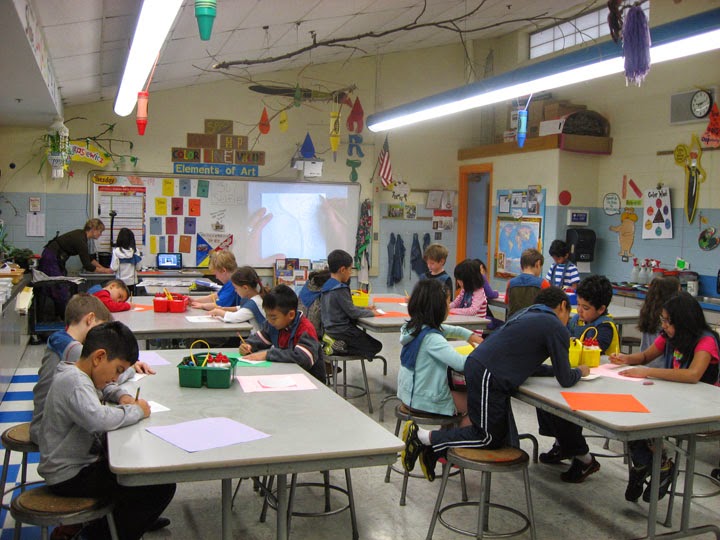 Fall 2014 - 7 and 8 year olds, grade 2, at Todd Hall Elementary in Lincolnwood, IL prepare for their four week assignment of "selfie portraits" that tie into local elections. Each student comes up with a "demand" to include in the artwork as speech bubble. 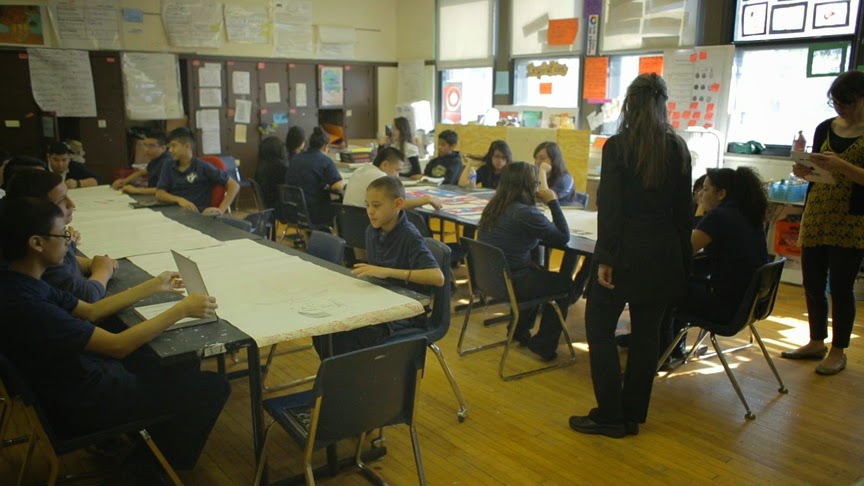 May 2014 - A visit to the Richard Edwards Elementary School in Chicago as the students work
on their Demandments, Chicago, IL, grades 7-8 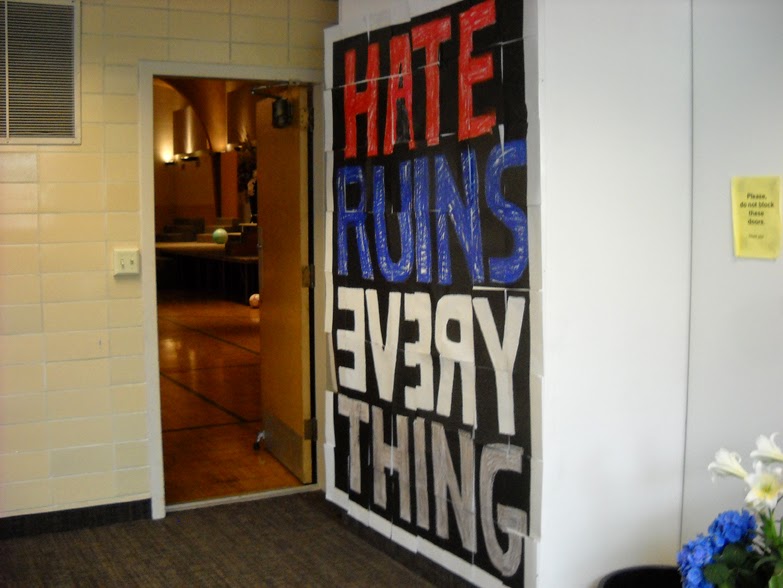 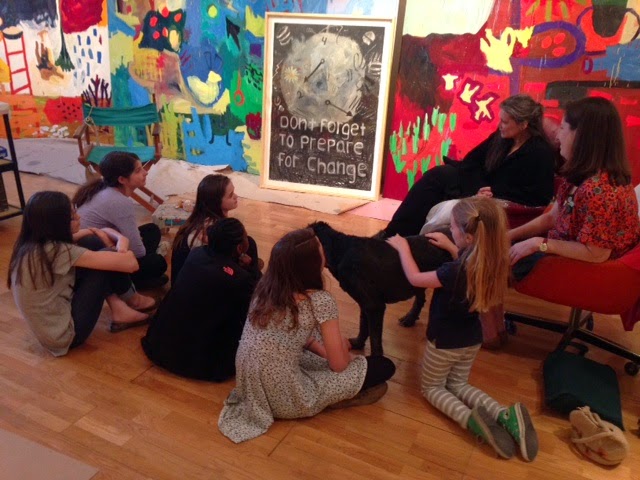 April 2014 - Meeting with five Girl Scouts working on their Silver Badge and using
The Demandments assignment to achieve it. 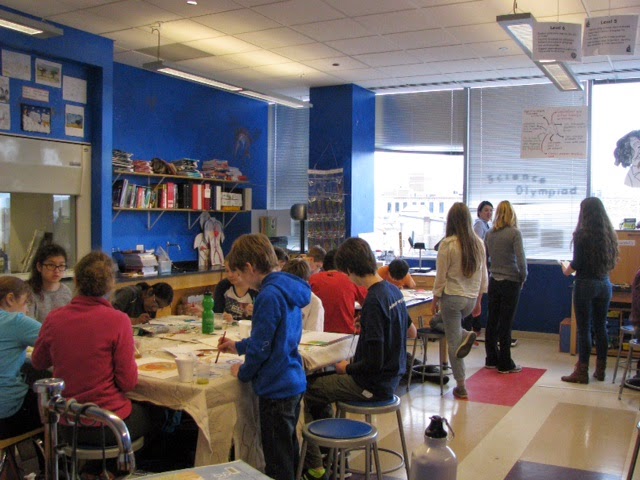 March 2014 - Lee visits the British School in Chicago to help with "Art Attack" week.
She meets with Natalia, who is in the 11th grade and our first student artist creating a Demandment. 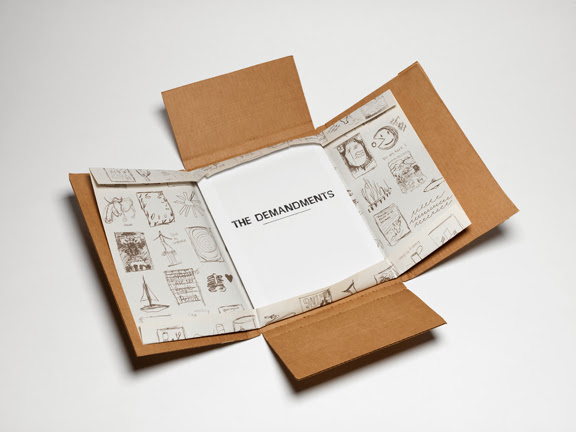 January 2014 - The Demandments Program is underway with the design and printing of 100 Mural Kits that include the assignment guidelines for students to create their own Demandments. The kits are free and currently have reached 60 local schools in Chicago, where an 8ft mural is pieced together by students to introduce the assignment. 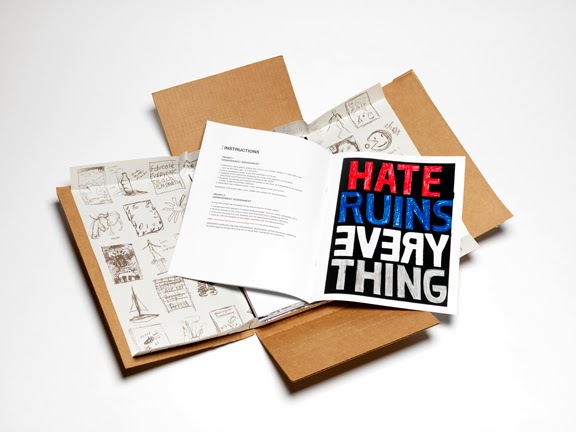 Fall 2013 - Start up funding grant awarded by The Clif Bar Family Foundation for the pilot program in Chicago. 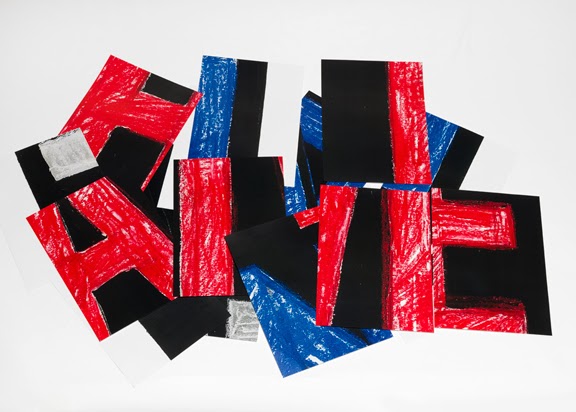 Spring 2013 - Artwork in progress with 70 works on paper created, 110 being the final goal. Educational doors open with an assignment for children, introduced by a large scale, student-made mural pieced together by students. 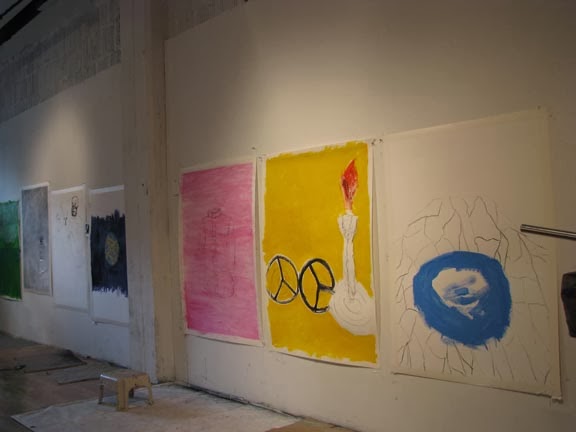 2012 - Artwork in progress with 50 works on paper created, now called "The Demandments." More paper is purchased to grow the body of work. The Demandments website launches mid-year. A team forms to work together. 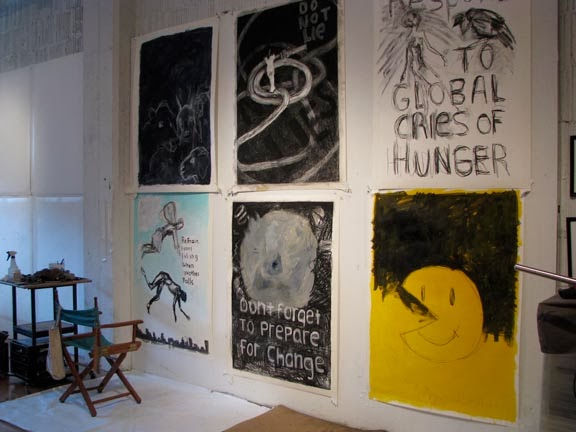 2011 - Artwork in progress with 25 works on paper created. Research on issues continues as Lee Tracy determines the final number of works in the series. Mounting issues continue to influence the body of work. 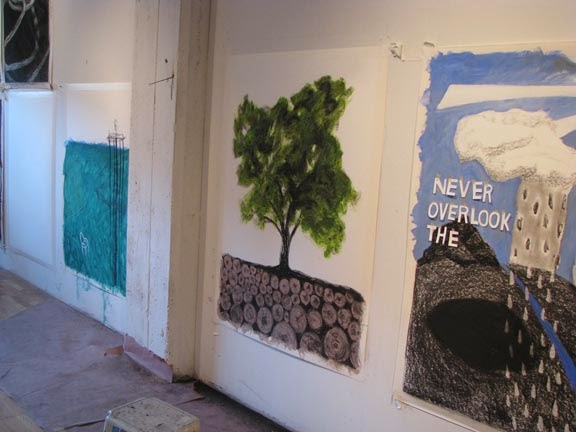 2010 - Concept for an agitprop series begins with the purchase of 50 sheets of fine art drawing paper.
Lee Tracy sets out to create a body of work that uses imperative sentences.

We are dedicated to being accessible across the spectrum of politics, sex, gender identity, orientation, race, ethnicity, religion, region, income, health status, and physical ability.

We do not censor young voices or avoid difficult subject matter. Our program guides rather than controls the processes of inquiry and the construction of knowledge. Our stance is one of inclusion in documenting opinions that encourage exploratory talk and increased understanding within the classroom setting. However, we don’t condone hate and will refrain from posting statements not constructive to student discourse.